I made an AI to play a simple game by using reinforcement learning via a value function on game states. Motivation:

Basically, I wanted my own amusing progression story. The game I designed is really minimalistic: you play as a circle on a 2D square and move with fixed speed

, trying to collect as many "coins" as possible. At fixed intervals a new coin will spawn on a random point on the square. Here's the AI learning.

The AI takes in the following 3 pieces of data when choosing a target coin to move toward:

Value reinforcement learning works by equipping the AI with a function

, meant to predict the expected number of points it has yet to gain in the game state. If this function is accurate, it should be easy for the AI to decide which move to take next. If it targets the

th coin available, the next game state (ignoring new coins) will have

th coin. The AI should simply target the coin

which maximizes this function.

I created a natural model for 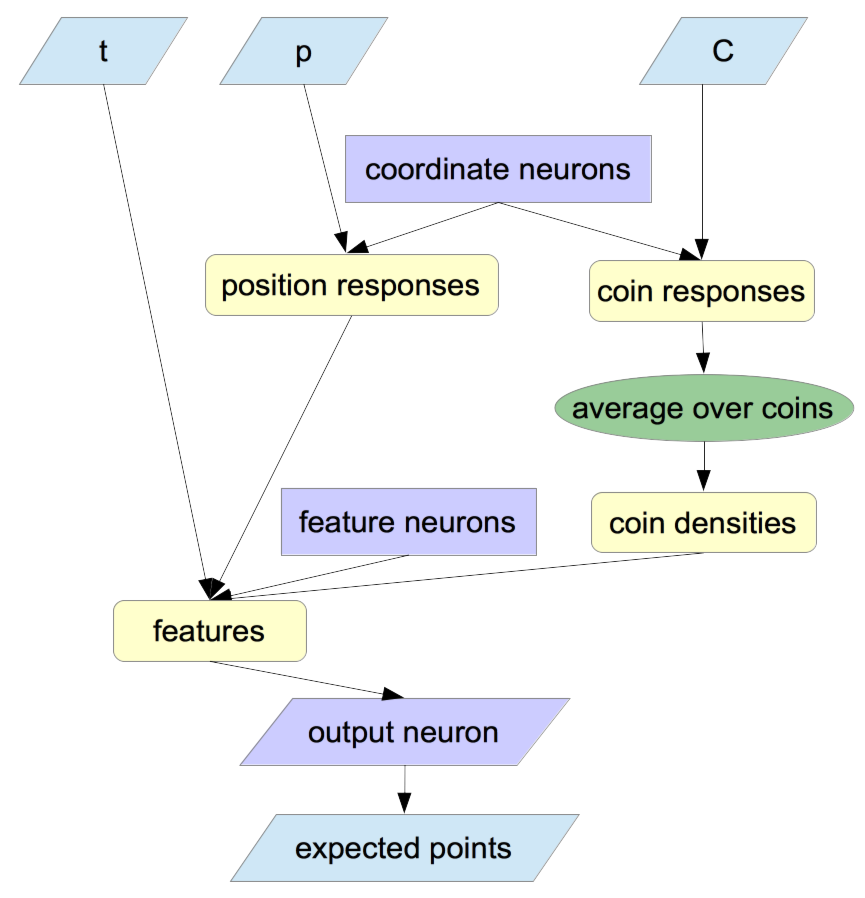 All positions (for coins or the player) are interpreted by the "coordinate neurons". Those normalized responses, as well as

, are fed into feature computation. Those features are weighted by the single output neuron. The output neuron is linear, while all others use tanh.

To train the network, I took 100 snapshots of the game state as it progressed, as well as the final score. From that data, I could calculate the gradient of the loss function (just

is final score and

is the score during the snapshot) and update coefficients for all neurons.

Knowing this, the progression above should have new meaning: from 0 to 50 iterations, the AI was mostly learning not to play favorites with different parts of the board, and after that it was learning some of the finer details about tradeoffs between saving time and getting closer to clusters of coins. It still wasn't perfect at making those tradeoffs, but you can at least see that it tried.

To get this AI learning consistently and quickly toward a good extremum, I made a few optimizations:
< previousnext >