If you have learned to drive, your instructor may have told you to obey the "2-second rule", which states that you should drive such that your car is always 2 seconds behind the car ahead of you. It turns out that if everyone were obey this exactly, traffic jams would rarely ever disappear. Fortunately, there is a solution: if everyone adjusts their time to the next car based on their speed as in the following chart, traffic jams will dissipate more quickly. More modern suggestions for these times made from a safety standpoint match up closely.

The only discrepancy is that you may want to stay 2 seconds away even at very low speed. Please don't do anything stupid just because of this post.

-second rule" exactly, your distance to the next car is proportional to your speed. This rule makes sense if you are expecting to slow down, say, 20 km/hr if something unexpected happens, but the distance required to stop your car entirely is proportional to the square of your speed instead. For practical purposes, you might pick some rule where your distance to the next car is

is your speed and

I'm going to analyze some partial differential equations (PDEs) here, so if you aren't comfortable, feel free to skip to the plots - just make sure you understand that

determines how you scale your distance to the next car with speed.

For simplicity, let's make the following assumptions: Everyone obeys

. For most of this post, I'll assume everyone uses the same

. The road is infinitely long. Everyone's speed is high enough that a car length is small compared to their distance to the next car (that means I'm only considering traffic jams where people slow down, not stop). As with most traffic setups, the flux of cars through a particular section of road is

is traffic density (in, say, cars/km) and

is their speed in that section. The rate of change in traffic density with time there is

is distance along the road. The simplest case is

. That means that each car stays a constant distance from the car in front of it, regardless of speed - a terrible policy in real life. A driver's velocity would then be the same as the that of the driver in front of him, so every car has the same speed. This implies

does not depend on

. This is just a transport equation whose solution looks like this:

Here, the green dots represent particular cars as they move with the traffic. The shape of the traffic density is entirely determined by the initial condition of the road - it could be any other function, but it (and the cars) would still move in unison. However, this ubiquitous velocity could vary with time, so the problem has many possible solutions; it is not well-posed. We could observe all the cars speeding up or slowing down, as long as it was done in unison.

Since I just dealt with the case

for the rest of this post. These cases are more complicated, so until the end of the post I will also assume that each driver uses the same constant

is inversely proportional to the traffic density

for some universal constant

. This brings me to the second simple case:

. In other words, the traffic stays in place while the cars move:

In the case that

is constant, our equations give

, which in turn means that the flux is

That means our partial differential equation is

This is a type of Burger's equation whose properties are fairly well-understood. This equation describes the traffic moving at

whereas the individual cars move at speed

by definition. This is agrees with our example with

above, where the traffic did not move at all. For

, we will observe the traffic density moving backwards as cars go forward, and for

, the traffic density will move forward.

Solving this PDE is difficult since discontinuities appear when fast traffic and slow traffic meet, causing a shockwave. Here's an example of a shockwave forming with

There is of course a physically acceptable solution after this discontinuity occurs - one in which the number of cars is conserved (the entropy condition). The discontinuity remains, moving at speed

is the traffic density on the right of the shockwave and

is the density on the left. In the example above, that speed is

, which is somewhere between the speed of the fast traffic density and the slow traffic density. As alluded to before, the shock will move backward in the case that

. This actually happens in real life when cars stop within the jam (https://www.youtube.com/watch?v=7wm-pZp_mi0). Here's an animation:

This may appear to be the mirror image of the

, case, but they are algebraically different. An algebraically similar situation actually arises when slow traffic follows fast traffic. This results in a sort of anti-shock where slow cars need to accelerate to fill in the growing gap between them and the fast cars, as seen in the next animation.

is not 0 or 1. While the jam is extending on one end, it is growing shorter on the other end at a faster rate. Here's an example with

What would be the ideal

for eliminating traffic jams? For which

does the low traffic density "catch up" to the front of the traffic jam most quickly? You might have expected the answer: the smallest

possible. Unfortunately, this is a horrible idea unless you enjoy rear-ending everyone on the highway. If we only seriously consider

, the question gets interesting.

is always between 1 and 2. Take a look at this example where the traffic density in the jam is twice as high as normal: 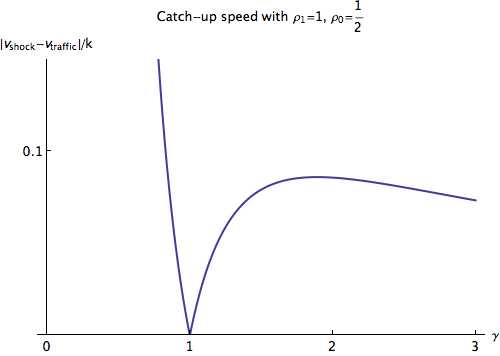 The denser the jam relative to the rest of the traffic, the lower

should be. I'd say we can reasonably expect the density ratio

to be no more than 20, and in those cases, the best

is actually between 1.6 and 2. The catch-up speed is a fairly flat function of

in that interval anyway, so any

in that range will do. If you want to be picky, here's the optimal

as a function of 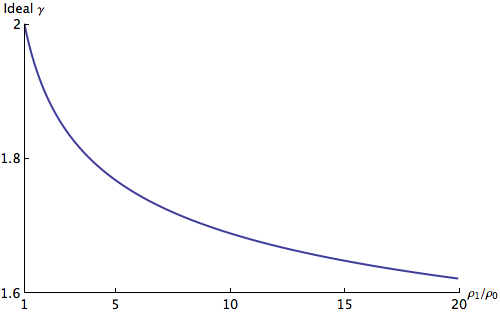 In general, I think

is reasonable. That's what I used to make the chart at the top, along with the 3-second rule at 80 km/hr.

Here's the caveat: for

, a short traffic jam slows down each driver less than a long section of slightly increased traffic. So why would we even want to dissipate traffic jams? The answer is the speed limit. If we enforce a speed limit, no matter how sparse the traffic becomes, no one will exceed a certain speed; if traffic is only slightly increased in one region, no one would have to slow down at all. This tends to be the case in reality, so long sections of slightly denser traffic usually cause little impedance.

differs from car to car, then

does as well, and it propagates at the same speed as the cars. That implies

This is an abominable system of nonlinear partial differential equations. I plan on making a numerical method for this and animating some scenarios in a future post.

I also didn't have space to animate the effect of a speed limit on traffic, so I'll include that as well.