has exactly one edge between them: either

. Let's make a tournament where each player 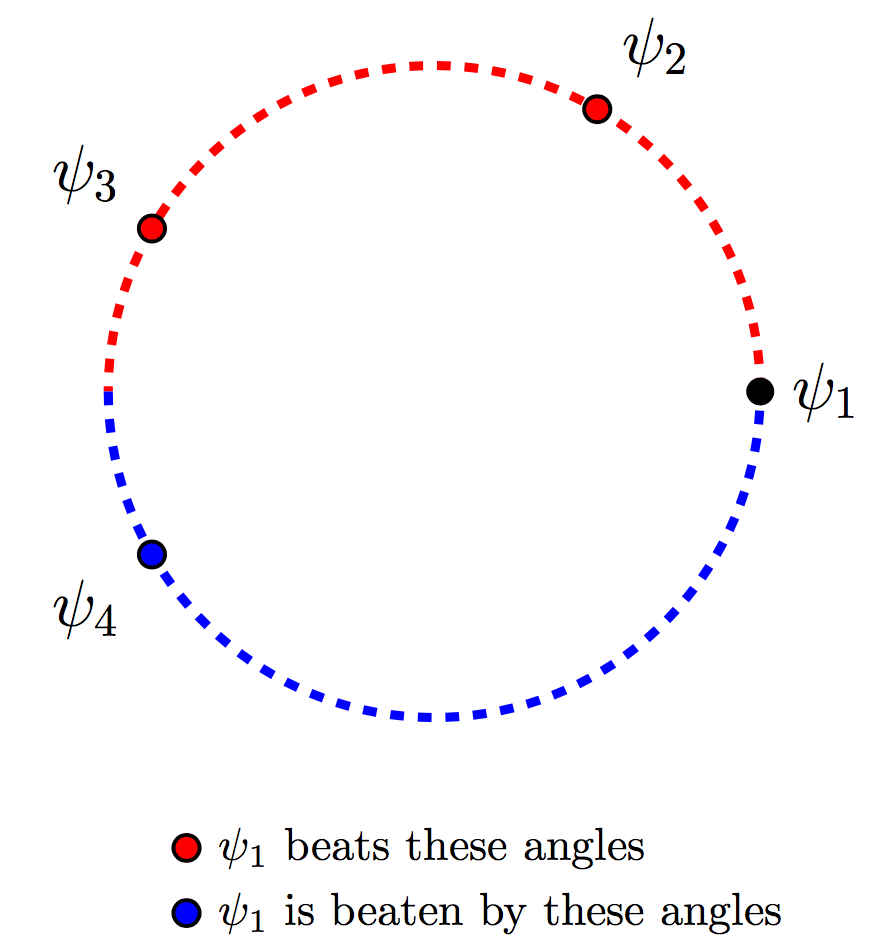 . This tournament has some neat properties:

Using these and some cool facts from my previous post, we can find a set of 3 points on a sphere to use for interpolation at another given point. What the hell? 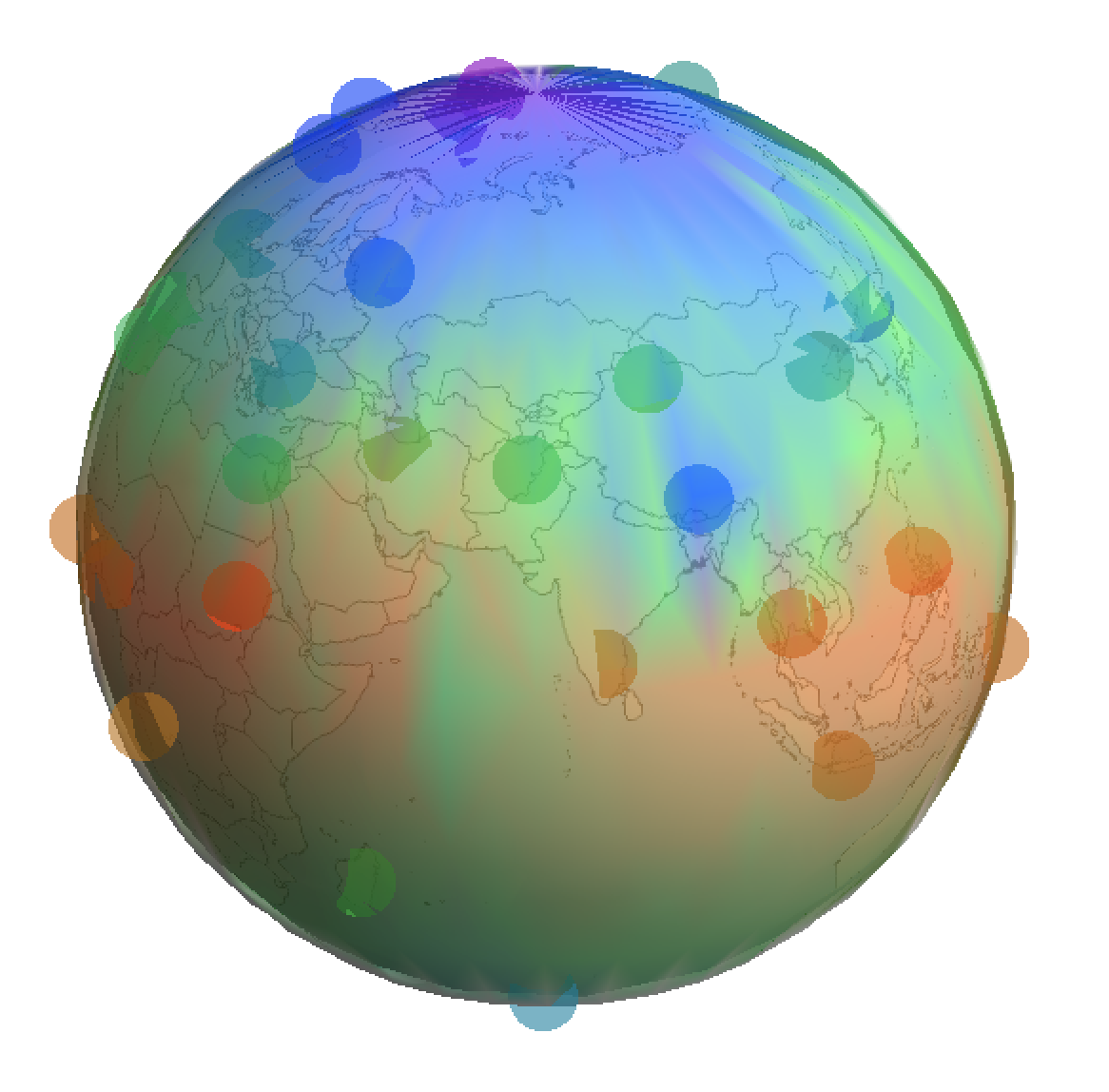 Here's what this tournament looks like. Each point (other than the center) is an angle, and each arrow represents one angle beating another. 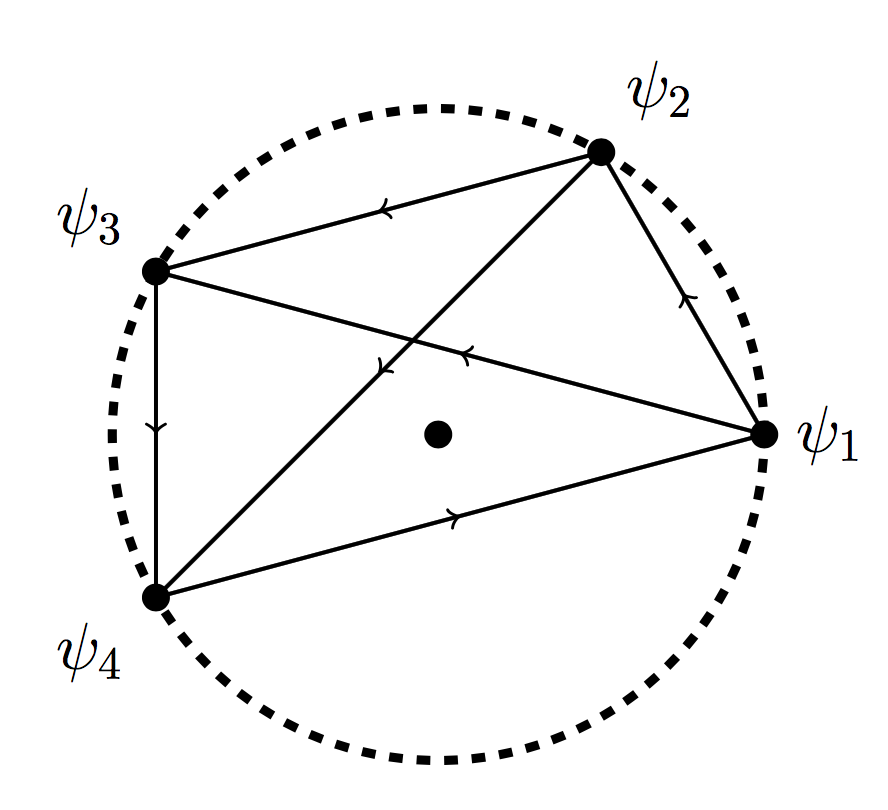 My first claim above states that for any cycle, such as,

, there is a shorter subcycle. In this case one such subcycle is

My second claim says that since this tournament contains a cycle, there is no angle which beats every other angle. Each angle has at least one arrow pointing to it, so this holds true.

First Claim: every cycle has a subcycle of length 3

Let's first argue that any cycle has a subcycle of length 3. Suppose the cycle

. If the cycle does multiple revolutions, then it must pass over

at least once; it jumps from some

is couterclockwise from it. Then we know that

is a shorter subcycle.

On the other hand, if the cycle does only one revolution, then consider each consecutive pair of angle shifts: the counterclockwise angle between

, and so forth. Since the average single angle shift is

, the average of these double shifts is

, one of these double angle shifts between

must be at least

! Therefore we can simply skip

, leaving us with a shorter cycle

. This is illustrated in the example below, where the red edges can be replaced by the dotted edges. 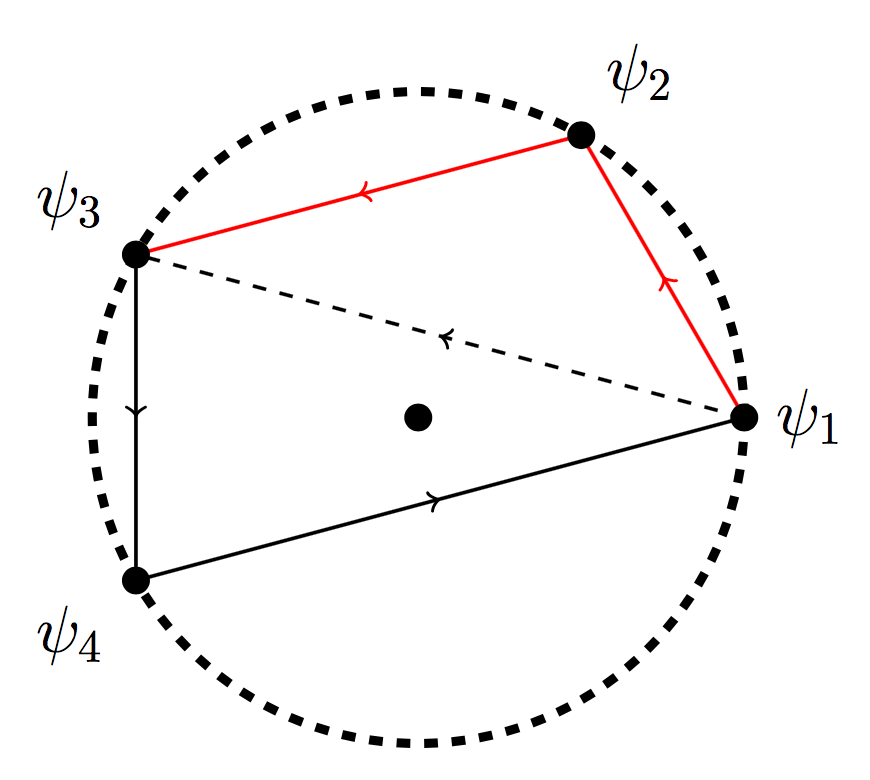 Since any cycle of length greater than 3 can be shortened, we can continue shortening a cycle until we find its subcycle of length 3. That shows the first property.

We want to show that there is no cycle if and only if there exists an angle which every other angle beats, so consider the example below. Since every angle beats

beats nothing, and there is no cycle. 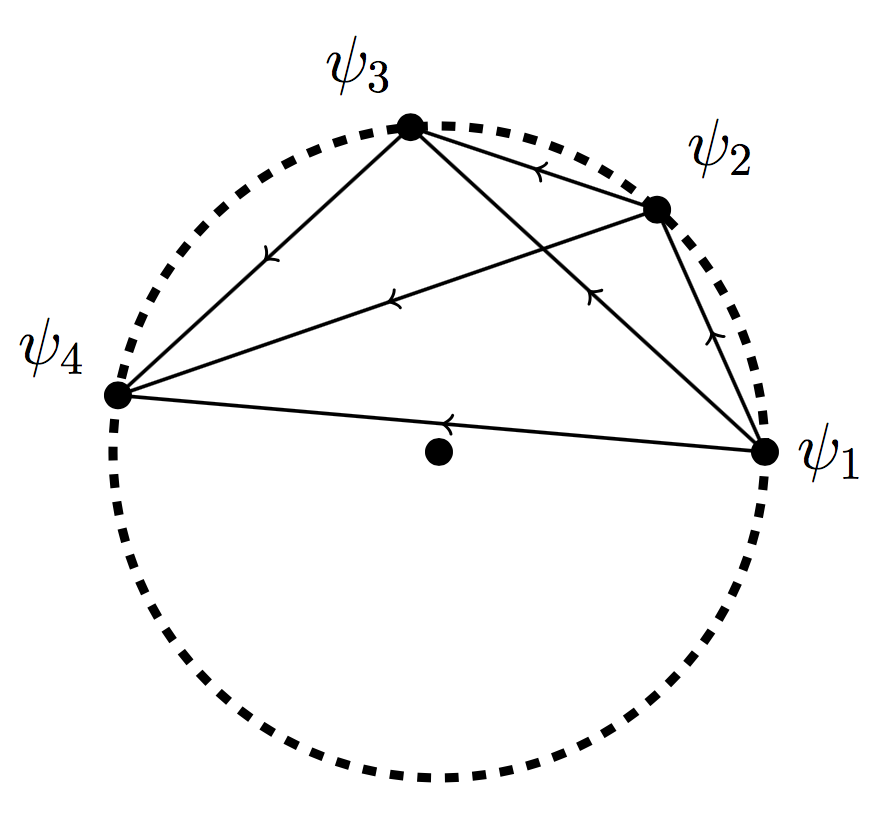 If there is an angle

which every other angle beats, then that

doesn't beat anything. Then the entire swath of circle between angles

must be empty. Since an angle can only beat angles that are within

of it in the counterclockwise direction, no sequence of

's can get past this swath, so there can be no cycle.

radians clockwise from one and less than

radians counterclockwise from the other. Therefore if a cycle exists, every angle has at least one edge going into it and one coming out. That shows the second property.

(or decide there is no such set), but how would you rigorously explain how you found those stations?

There are a few ways to program the solution. The first is Delaunay triangulation, in which we draw a bunch of non-intersecting lines between these weather stations so that the whole sphere is covered in spherical triangles. Then we simply choose the weather stations forming the vertices of the triangle surrounding our point. The advantage to this approach is that it gives you a consistent approximation every time you estimate the temperature at a new point on the globe. The disadvantage is that using Delaunay triangulation and determining which spherical triangle

lies in are difficult programming challenges.

go in counterclockwise order by whether the determinant of

are the coordinates of weather stations

. Using this for every pair of weather stations gives us a tournament, and our problem is to find a cycle in this tournament. Using the properties above, we can quickly deduce whether such a cycle exists, and some basic algorithms let us find a good cycle pretty quickly.

I implemented this second approach, taking temperature data from various cities on the globe today. I learned a bunch of capitals in the process.